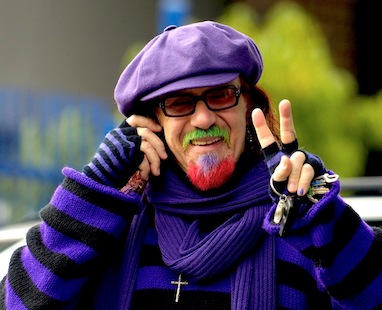 Born in Portland, Oregon, Mark first came on the scene in a band with his brothers, Bill and Brett–the Hudson Brothers.  The Hudson Brothers had two top-20 hits, “So You Are A Star” and “Rendezvous” produced by Bernie Taupin for Elton John’s Rocket Records.

After the brothers broke up, Mark went on to learn music production and successful songwriting from the legendary Phil Ramone and assisted him with production on Flashdance.  He began to get cuts on albums by artists including Cher, Michael Sembello, Alice Cooper, Eddie Rabbit and Bobby Caldwell.

In 1992, Phil felt Mark was ready to fly solo, and so “Time Takes Time” was the first album Mark worked with Ringo Starr.  He went on to produce 8 albums with Ringo including “Ringorama”, “Vertical Man” and “Choose Love”, to name a few.  Then, in 1993, Mark wrote the Grammy winning song, “Livin’ on the Edge” for Aerosmith, which went to number one worldwide.

In 2005, Mark appeared on the Simon Cowell show, “The X Factor”, which also starred Sharon Osbourne.  Mark was the vocal coach known as “Weird Beard” and Sharon’s partner for 3 years on the hit series.  During that time, Mark wrote and produced, “It’s Chico Time”, which went to number one in England.  He also produced Ozzy Osbourne’s first number one single titled, “Changes” with Ozzy and Kelly Osbourne.

In 2011, Mark finished filming the second season of “Rock N’ Roll Fantasy Camp”, a Mark Burnett production on VH1classic in the U.S.  He also recently finished his first solo album, “The Artist”, that includes vocalists and musicians such as Steven Tyler, Joe Perry, Ringo Starr, and Harry Nilsson.

In 2012, Mark joined the team of IDA—“Inspire and Develop Artists”, a school for aspiring new artists with Rudy Perez, Jon Secada and David Frangioni, which develops new artists through songwriting, singing and recording.